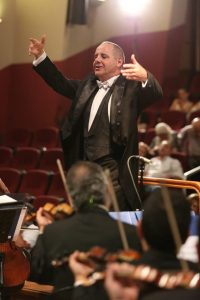 The well-known Lebanese pianist, composer and orchestra conductor retired General Doctor Georges Herro, talked to Diafanís magazine about his musical career, his studies and the importance of music in people’s lives.

Coming from a musical family where the first teacher was the father, General Dr. Herro the hard-working person has achieved the PhD in music. Besides, he has received numerous distinctions in his country and abroad.

Between the sounds of metals, the memory of marches and the Lebanese folklore, the interview went as follow:

Well, let us firstly agree that being talented in any art is a gift, and nobody can create or implant this talent in one’s soul. However, being raised in a musical environment will definitely help discover this talent and develop it.

For me, I was fortunate to be raised in a musical family, my father was a composer, a conductor and a pianist (my 1st piano teacher since my early ages, as you indicated). And of course, he transmitted a lot of from his expertise.

I joined the Lebanese conservatory in 1977 to proceed with my musical theory lessons (solfeggio, harmony, counterpoint) with the late former president of the conservatory Mr Toufic Succar, where I completed my diploma in 1985.

In 1978, I enrolled in USEK, “The Holy Spirit University of Kaslik”, to follow my Musicology studies and pursue my piano lessons with the late Mr. Stephan Emian, where I earned my Bachelor’s degree in 1981.

As an orchestra conductor, I started practicing conducting during my service in the Lebanese Army Band. I did participate in many world workshops especially in France, and Romania.

Then, I held the position of Chief of a musical troop in the music army regiment. In 1995, I was selected as chief of the military musical army school.

In 2000, I was appointed to be the commander of the music army regiment. I remained in this position until my retirement in 2012.

As a matter of fact, military bands have their own character and peculiarities. They specifically consist of winds brass and percussion instruments. Some special professionalism and studies are needed to be able to orchestrate this kind of bands.

In ancient times, the music bands constituted of trumpet piccolos and drums used to march in advance of the infantry to give them order to attack and also to boost their morale, because music is well known to be the most significant art that easily enhances courage and enthusiasm.

These days, the military music, besides what I have mentioned above, has the protocol duties and participates in all official national ceremonies. Not to forget its importance in the civilian ceremonies and parades.

During my service in the army, I was delegated to visit the music military bands of French army infantry band, the Jordanian military band and also the Romanian one. And I had the opportunity to lead their bands.

In 2014, I founded the Zaki Nassif ensemble of oriental music in AUB American University of Beirut. I am still an active member of the board as well as the conductor.

I am also a lecturer at the Lebanese American University.

I received many medals throughout the journey. Some were from foreign Presidents, in particular The French and the Slovakian ones while their official visit to Lebanon. They were both amazed by the capacity of our troops and were astonished by our performance of their respective anthems. I remember them saying that the performance was better than their own troops.

I can say that during my military service I have incorporated the Lebanese folk music in all my civil concerts and the military band had a big reputation in that we participated in almost all events and festivals held all over the country.

Indeed, on the 17th of October 2019 I was invited as a guest conductor to lead the Lebanese national oriental orchestra. The program included Lebanese and Egyptian works.

And furthermore, with many choirs such as the famous Fayhaa choir and others like school choirs the conservatory choir , the zaki nassif choir.

My advice is: Don’t be content with your talent. Just refine it with your in-depth musical studies. Continue to the end. Don’t stop at the middle of the road for believing you have received enough music. Never think you have reached the top but keep your feet on earth and always seek for more.

Thank you for interest, it’s my honor to have been at your assistance. 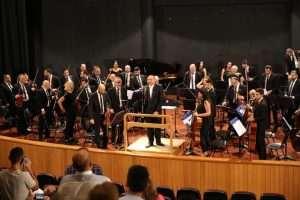 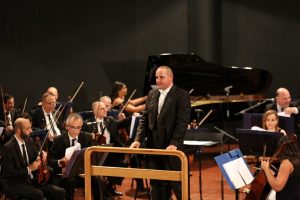 Raised in a musical family, he is a pianist, a composer, and an orchestra conductor. He received his first piano lessons at an early age at the hand of his father, Maestro Mike Herro.

In 1979 he joined the Lebanese National Conservatory and pursued theoretical studies in harmony and counterpoint under the supervision of its former president, Maestro TouficSuccar. He received his Conservatory Diploma in 1985.

Also in 1979, he enrolled in the Faculty of Music at the Holy Spirit University of Kaslik (USEK), where he pursued his musical studies until receiving his Diploma in Musicology in 1982. At the same time, he followed piano lessons with professor EstephanEmyan.

In 2004 he began his doctoral studies at USEK until he received his PhD degree in 2010.

In 1983, he joined the Lebanese Army as Cadet Officer Musician and graduated as Lieutenant Musician in 1985. Until his retirement as General in 2012, he occupied several positions, particularly that of Chief Conductor of the Lebanese Army military band since 2000. He also led the French Army musical band as well as the Royal Jordanian army band.

He participated in several Lebanese festivals and performed in numerous concerts with the participation of well known artists among whom GhadaShbeir, AbeerNemeh, Nicolas Osta, Sami Clark and soprano Samar Salameh.

He received several trophies mainly from the French and Slovakian Presidents.